On January 20, proton's chief executive, Li Chunrong, announced that the country's carmaker's second SUV would be launched in 2020 at a Chinese New Year Press luncheon. The smaller model, well-known as the Proton X50, will be the company's second major product after the X70 is assembled locally this year.

According to AmInvestment Research, Proton is on track to launch its highly anticipated X50 SUV in October 2020. According to Li, the car, based on the Geely Binyue/Coolray, would be produced immediately as a locally assembled vehicle, rather than an imported car just like the X70. Because donor cars, the left-drive vehicles, can only be driven in China. Earlier reports said proton's Tanjung malim plant would become Geely's right-handed production center.

The prototype has been spied on several times since early last year, most recently earlier this year. Unlike the previous mules, the latest models wear Proton's new "Infinite Weave" grille, hinting at an imminent launch – which proved to be correct. 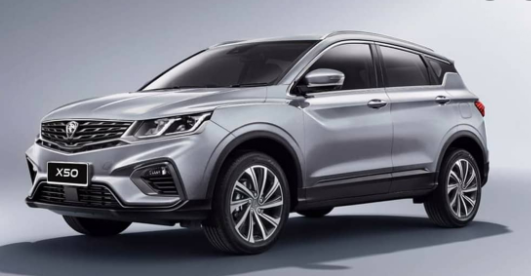 A panoramic sunroof, dual-zone climate control system and adjustable power driver's seat, as well as a 10.25-inch infographics touch screen running on Geely’s main user interface (GKUI) and built-in "Hi Proton" voice control, all of these are what customers want to find in X50. Binyue also has level 2 semi-autonomous driving capability in China, but we’re not sure if it can be applied in Proton X50.

Coolray's design is inspired by "time travel". The looks make perfect sense and natural. The winge front is reminiscent of the golden bat and is adorned with a lightweight grille with a hidden "G" monogram and a variety of LED lighting. The body looks firm and muscular because of the addition of sharp creases. The intersection of the fender and the hard shoulder of the front door is a special example of Geely’s high-pressure stamping capabilities. The curved roofline ends in such a stylish half-d-pillar that the "wings of time" taillights hide the hard shoulders beneath them.

The "sport" variant we use here has a gorgeous 18-inch turbo alloy hub, a black top and advanced accessories with a synthetic carbon fiber finish – front splitter, rear wing and diffuser. There's no real aerodynamics – the non-plastic airbags underneath can do all the work – but they're beautiful.

The interior, best described as a "Trekkie," features a shiny grip and elegant exhaust AC vents that form a multi-mode LED dashboard and a 10-inch wide touch screen. More G's are hidden in the speaker grille and center console, while the LED "wave" lights under the silver panel light up at night and match the color of any driving mode you're in.

Although low seat cushions and tight foot space force you to step back to let yourself sit comfortably, sturdy black and red leather buckets can make up the shortcoming above and boost driving comfort. The rear seats and trunk are roomy because of a 2,600mm wheelbase, but the large full-length skylight and integrated electric shade result in a slight reduction in space. There is a removable seat cover at the back and the rear seats can be folded down to allow more space, although this is hardly necessary given the size of the suitcase.

Geely's engine begined with a small bark and then stabilized into a smooth, whispering idling state. Start from the inside, it's Crank the window then you'll encounter the silent but familiar sound of a three-cylinder grinder. But there's a huge honking turbo. The 1.5-liter engine from Volvo delivers 175 horsepower and 255Nm of torque, better than the comparable Volvo XC40 T3 — at least until next year's power upgrade. As the eight-speed Volvo automatic is replaced, Coolray has a seven-speed dual-clutch and it’s likely to be seen on the XC40 next year.

The combination achieves a speed of 100kph in approximately 8.6 seconds, although the response is delayed when stopped. The boosters start at less than 1,500 RPM and are ubiquitous, although the gearbox typically shifts below 6,000 RPM. Compared to other dry clutches on the small DCT, the wet clutch system eliminates the expected slippage, hesitation and haste in stop-and-go traffic. Only in hard variable speed motion mode, the low-speed acceleration will feel the jitter. In "energy-efficient" mode, the operation is as smooth as butter, but the response feels too tedious.