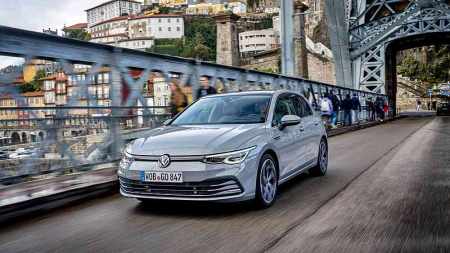 For years and years, you've always been waiting for a new sport version of the VW Golf. Now, there are three at once! But we are not going to complain that none of them is revolutionary. Especially since we had already had teasers from GTI and GTD recently, but the main thing is that they are there, right? Anyway, for VW it is sure because this trio GTI, GTE and GTD should value more than 15% of the total sales of Golf in Europe.

And the star of the Geneva Motor Show which opens its doors during the week will certainly be, at least for VW, the Golf GTI. Besides, the other two would probably not exist without it. The 4-cylinder 2.0l turbo still develops 245hp and 370Nm of torque – as expected – and if the figure is not announced, we can expect a 0 to 100 km / h in just over 6s. and a top speed of around 240 km. While waiting for the future Golf R which will distribute more than 300hp to all four wheels – we always want to go faster than the music – the power of the Golf GTI will be transmitted to the front wheels only via a 6-speed manual gearbox or a 7-speed DSG.

The GTD and GTE engines are more interesting from a technical point of view. The first has one of the cleanest diesel engines in the world according to VW – a 2.0l turbo that uses a double-dosing system to reduce nitrogen emissions. By the way, it also offered a small power boost from 184 to 200hp and it will only be offered with the DSG.

The GTE, which also gained power, displays 245hp like the GTI but more torque with 400Nm and above all a power delivered differently. 150hp comes from a 4-cylinder 1.4l petrol and the rest is supplied by the electric motor powered by a battery which offers 50% more capacity, that is 13kWh A DSG 6 box takes care of sending all this to the front wheels. Between the battery increase and the aero improvements, the all-electric range would now be 60km.

The GTE may display the same power as the GTI, it should not be forgotten that the batteries and all the hybrid paraphernalia add weight. As a reminder, the Golf GTE Mk7 204hp which therefore had a lower capacity battery already charged 200kg more than the GTI. But VW has promised us “significantly improved” dynamic qualities for the GTI GTD GTE trio thanks, in particular, to revised suspensions and a smarter (optional) piloted suspension.

On the look side, no jealousy, the three cars are identical with the only difference of the color code. The GTI proudly displays the now-iconic red grille strip, that of the GTD is chrome and the GTE is entitled to blue. All are entitled to these daytime running lights in the form of 5 LEDs on each side of the front bumper which… are reminiscent (evoke?) Of the distinctive checkers of the Clio RS and Mégane RS. And all can be equipped with this light bar which connects the two optional optical units. To distinguish them from behind, the GTI sports two exhausts (one on each side), the GTD opts for a double exhaust and the GTE hides its own. And as you can see, the watchword for all three is discretion.

What about inside? More screens than buttons you can find in it and for those who stay inside, the majority is tactile rather than buttons. All these are aiming to meet the modernity requirements. Checkered upholstery and the essential sports steering wheel are also provided by the GTI, E and D. For the GTI mechanical box, the lever is topped with THE golf ball. Bravo

The safety performance of Proton x70