The restyled Perodua Axia has been officially unveiled recently. This morning the revised bestseller was revealed in Perodua Sentral, after the scheduled show – the MYPerodua national carnival, which was due to take place this weekend in Setia Alam – was canceled because of the haze.

The online booking for 2019 Perodua Axia was opened last month and Perodua announced the full specs and the price (but not the final), although they didn’t release any official pictures. However, we can now confirm that the price is final. As Malaysia's most affordable cars, it ranges from rm24,090 for the "driving school specification" standard E to rm43,190 for the Advance model with all the premium features.

Axia, which replaced Viva, has stood its feet firmly in the Malaysian market since September 2014 and underwent a mid-life facelift in January 2017. Two distinct faces are designed for Axia throughout his life – the ordinary face and the sporty face for SE and Advance. This split is no longer needed – all Axia variants now share the same appearance and shape, but with different decorations. 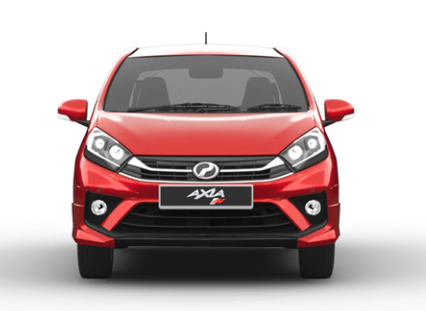 There’re four trim levels (E, G, SE, advanced) for the upcoming Axia range, two of which have manual or automatic choices (base E is MT only, advanced Advance is AT only).In the 2019 Axia series, Perodua produced two brand-new variants and removed the SE's manual option, which meant that all Axia except the kosong E is with a four-speed automatic transmission. New series includes E, G, GXtra (new), Style (new) SE and Advance.

As before, the 5MT and 4AT are matched with a 1.0l three-cylinder engine. The 1kr-ve vvt-i produces 67 horsepower and 91 Nm of torque at 4,400 RPM. The claimed FC remains unchanged – MT is 22.5 km/l and AT is 21.6 km/l. The new suv-inspired Style has a lower rated RPM of 20.8 km/l, possibly because of extra weight, bigger tires and less smooth airflow. The Axia is seen as one of the energy-efficient vehicles (EEV).

We continue to study the equipment. As before, all variants on the E are revised with ABS and EBD, but the vehicle stability control system (VSC) debuted in the Axia in 2019. From GXtra up, we can easily find the active safety system and P2 anti-theft bag hooks. Well, but the surprising news is the presentation of the Advanced Safety Assist (ASA) 2.0 security equipped in the Axia Advance family.

P2's ASA safety kit appears first on Myvi and then on Aruz (in 2.0 form), including pre-collision Warning (PCW), pre-collision braking (PCB), pre-departure warning (FDA) and pedal error operation control (PMC), all with the help of a stereo camera places at the top of the windshield. The number of airbags in this model is still 2 and the Axia's four-star ASEAN NCAP rating is not abandoned, but the arrival of VSC and ASA 2.0 is significant in this market segment.

In addition to the security, the G specification comes with two speakers, electronic rearview mirrors and a 14-inch alloy. For many, the GXtra is where it really gets started – in addition to the VSC and anti-clasp mentioned above, it adds a rear-parking sensor, a driver's seat height adjuster and two (out of four) rear speakers.

As what is referred above, choosing the SE won't give you a distinctive look any more, but it's still the "sporty" variant in the series due to the front bumper apron and grille, and the front and rear bumper sides with red pinstripes. There is a suited red trim bar on the central stack of the dashboard.

Other devices since the SE include security and solar window tint, front parking sensors, electric folding rearview mirrors, "half-barrel" seats (with thick central stripes) and keyless access with buttons. As before, the top-level Advance is SE based, but it adds ASA 2.0 and a touchscreen console with a reverse camera.

Expect VSC and ASA, the biggest pleasure is the new Axia Style variant, which has an suv-style look – think Volkswagen CrossPolo, hyundai i20 Active and Honda r-v. The Axia Style is sport-utility vehicle Style, with no more off-road capability than a standard car, and can’t see any SUV characteristic in the P2.

As those international b-class models, the model is clad in suv-style black plastic around the underbody, with a silver finish underneath the front and rear bumpers, mimicking an anti-skateboard. The black roof rail brings what engineers expect, although they are only decorative and cannot be used to install the top box.

The styling's front end is just a little bit different from the rest of the range, thanks to a black carbon fibre textured sticker around the "mouth" that reminds us of the previous generation of blue Myvi SE. There are also unique decorative grille inserts and a distinct style color – sunrise orange. Besides, transparent taillights are unique to the Style of the 2019 Axia. The model is also 15mm taller than the other Axias.